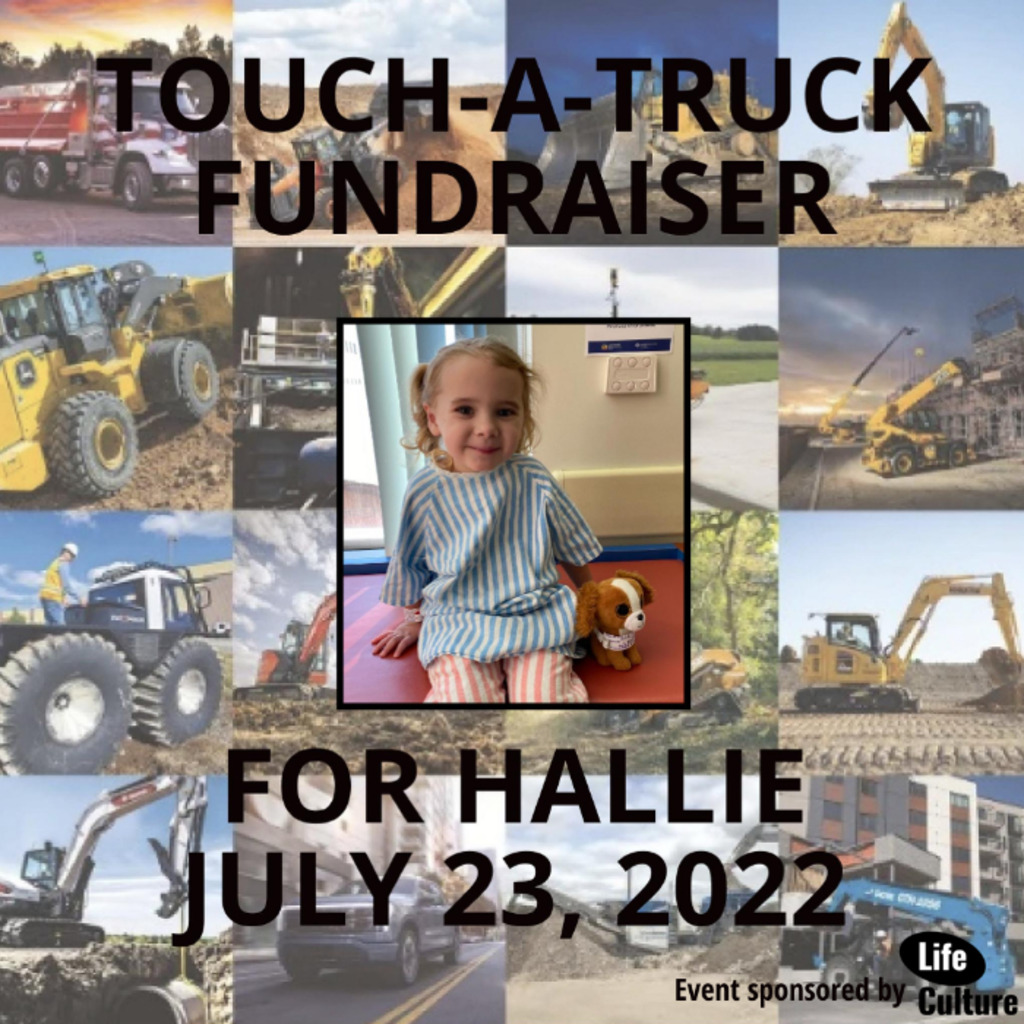 A touch-a-truck fundraiser is a family event where kids can come and see out of the ordinary vehicles and even get to sit in the driver’s seat too. There will be fire trucks, military vehicles, construction equipment, farm equipment, tow trucks, RCMP, concrete trucks, and more!

The event will be held at Kleefeld Park on July 23 from 10-3. There will also be a canteen supplied with pizza from Santa Lucia, silent auction, barrel train rides, face painting, princess photo ops, bouncy castles and so much more!

There is also a toy drive happening for the Children's Hospital Foundation of MB who have made such a big impact on Hallie's life. So bring a new, unwrapped toy to help support kids like Hallie who are in the hospital. (Toys must be new, and packaging needs to be able to be wiped down. No plush toys unless they come wrapped in plastic from the store).

Hallie is 3yo and she has a rare medical condition called Eosinophilic Gastrointestinal Disease. This disease causes her severe GI issues, abdominal pain, and she is unable to tolerate food. At one year old she had to stop eating food and began a diet of just a highly specialized formula. Since then, her GI issues have progressed to the point of requiring an ileostomy and gtube (a
feeding tube into her stomach). She deals with bouts of severe pain, intestinal pseudo-obstructions (where her GI tract act like she has a bowel obstruction even though there is no physical obstruction) and GI bleeding among other things. She has had 14 surgeries and has spent 193 days admitted in Children’s Hospital.

The medical expenses that have come along with Hallie’s disease have become overwhelming and our family is needing help. Her formula is supposed to be covered by the province, however, there has been a formula shortage during the pandemic making it hard for the hospital to find, leaving it up to us to acquire and thus pay for on our own. One can of this formula costs between $60-$72 depending on where we can find it, and one can only last 1.5 days. On top of this her medication costs about $500/month and every time she gets a cdiff infection, which happens every couple months, it is an additional $850. All of which we have no health coverage for. So, any given month is costing our family between $1750-$2600 depending on which medications she all needs.
We also have two medical trips coming up this summer. one to Alberta Childrens Hospital in Calgary for a specialized cdiff treatment, and another to Sick Kids Hospital in Toronto to meet with a team of specialists to do further testing and come up with a care plan for Hallie. A portion of these trips is covered by MB Health but there is still a large cost to us that comes with these trips.

Posted by Cari Thiessen under Fundraising in CHVN.